You are a Brainjacker, a merc for hire that uses implants on kidnapped Wageslaves to accomplish your mission.
You’re new though, you still have to use the public domain Brainjacking hardware.
So you’ll have some company in there...

Brainjackers in the Wageslave is a competitive mini tabletop role-playing game meant for 3+ players. Players create simple characters and have randomly selected missions with a narrator controlling the action. Only a single 6-sided die is needed to play the game. Included in the download is 2 PDFs. 1 PDF is designed for digital use or printing large individual pages, the second PDF is to print out as a double-sided sheet and then folded in half for a small booklet.

This is a digital product.

When you are making your Brainjacker the first thing is to come up with your Handle, only the most foolish use their Fleshnames in the Cyb3r-Fronti3r. If you’re at a loss, replace the first and last letters of your name with several Xs, maybe toss in 420 or a 69 at the end as well.

Each Brainjacker has a mission for this operation and it is decided by rolling a 6 sided die and using the list below. Don’t share your mission with the other players.

And finally, you’ll design your Console. Describe how it looks to the other players and then move on to assigning Neural Nodes and Programs.

Neural Nodes are needed for controlling the Wageslave as they boost your budget console’s signal to override other Brainjackers, you start with 20 of them.

Programs are pre-programmed commands that you can run when you have control of the Wageslave, as a freestyle game you should label your software open-ended things like “Precision_Shooting.exe” or “Seduce.bat”. If you encounter a scenario that you don’t have a program for, you can Hack one together but there is a greater chance of failure.

After a Brainjacker completes their mission, that player is the new Narrator.

At the start of the game, the player with the most tech on them is the first Narrator. The Narrator describes the scene and who CTO X is and what X-CORP is and does. The Wageslave starts outside the front doors of X-CORP. They keep track of Escalation and Progress, both start at 0.

Progress shows how close the Wageslave is to CTO X. At 0 the Wageslave is outside the front doors of X-CORP. Once Progress reaches 6, whoever is the Brainjacker in charge describes how they complete their mission and they win.

If bidding ever results in a tie, the Wageslave does nothing but drool in place as another round of bidding commences. If this happens The Narrator can choose to either raise the Escalation by 1 or reduce Progress by 1 as people get suspicious.

When a Brainjacker succeeds a roll they choose if either: Progress increases by 1 or Escalation reduces by 1. The Brainjacker should describe how this happens.

When a Brainjacker fails a roll they choose if either: Progress reduces by 1 or Escalation increases by 1. When this happens, The Narrator should describe what happened to cause that.

The Narrator should be frequently redescribing what is currently happening in the scene as control changes between the Brainjackers as they get closer to accomplishing their goal.

After The Narrator describes the scene each Brainjacker must bid a number of Neural Nodes.

Once winning the bid, that Brainjacker maintains control of the Wageslave until they fail a roll or their connection is disrupted. At any time a Brainjacker can spend 5 Neural Nodes, disrupting the connection of the Brainjacker currently in control. If either of those happens, another round of bidding commences.

To fit the brainjacking hardware into the Wageslave, most of their brain had to be removed, meaning that they can’t do anything alone but walk. Anything with a chance of failure requires a Processing Roll to see if a Brainjacker succeeds. A processing roll is when the Brainjacker in control rolls a 6 sided die, if they have a relevant Program they succeed on a 3 or higher. If they have to Hack, they succeed on a 5 or 6.

On a successful Hack, the player may add a new program to their Console. The program has to be relevant to how they overcame the obstacle.

Writing, layout, and design by me 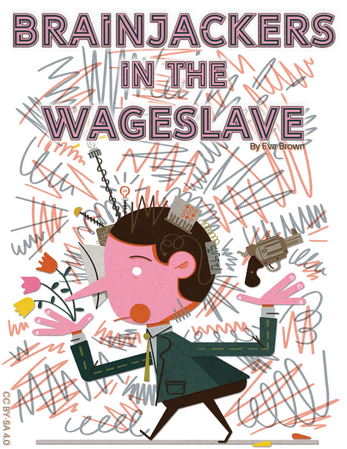 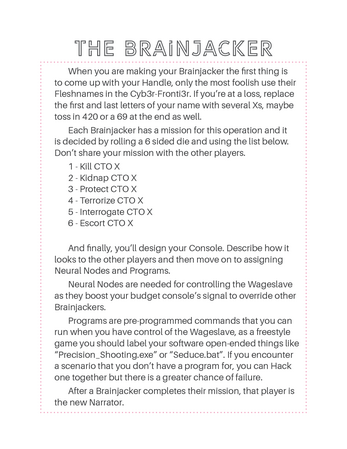 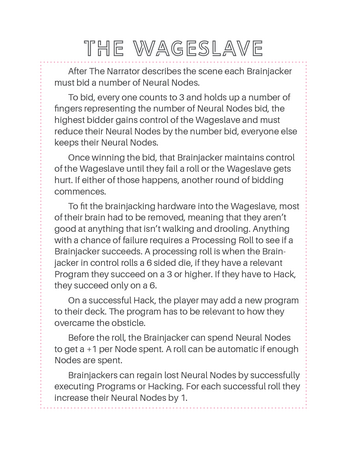 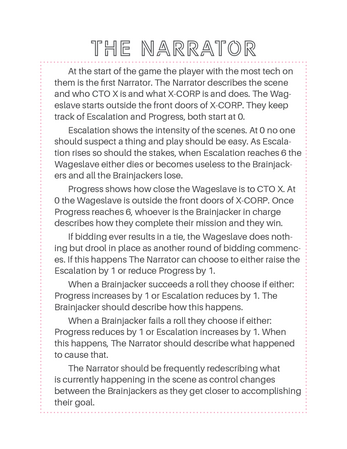